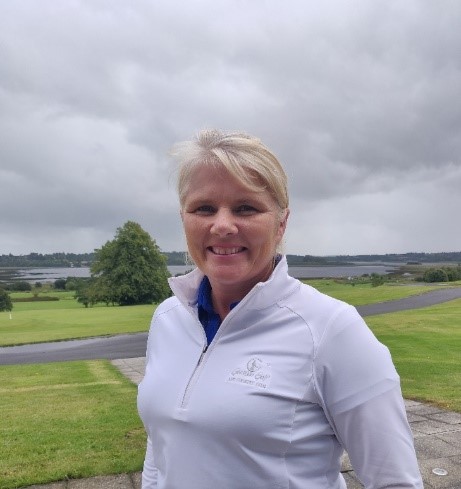 A qualified professional for more than 20-years, Lynn McCool is the Director of Golf at Glasson Lakehouse and a well known face in the golfing world having been a professional golfer in Ireland as well as a former competitor on the Ladies European, Asian and South African Tours.

As a successful amateur, Lynn won a string of titles throughout her native Ireland, and through this, a Golf Scholarship at the University of Hawaii before embarking on a four-year PGA Training Programme at The Belfry Hotel & Resort in The Royal Town of Sutton Coldfield in the UK.

Lynn began her career under the guidance of Michael Doherty, the former Head Professional at the City of Derry Golf Club. In 1999, as a newly-qualified professional, she was appointed PGA Teaching Professional at the Hilton Templepatrick Golf Club in County Antrim, and in 2004, was promoted as their Director of Golf.

In 2006, the former Irish Girls Champion joined the prestigious K Club in County Kildare as Head Professional. She managed a team of four PGA professionals, developing a comprehensive golf tuition programme and sales and marketing strategy to promote the 36-hole former Ryder Cup venue, with its celebrated Palmer and Smurfit courses.

Six years later, in March 2010, Lynn joined the team at Lough Erne Resort as Director of Golf overseeing two golf courses, a Golf Academy and two memberships. In 2012, as result of years of professional service and international acclaim, Lynn was awarded ‘Business Development Manager’ as voted by the Northern Ireland Institute of Hospitality, something she is very proud of. “Having worked at Hilton, I am very much aware of the Janus Hotel Award run by the Institute of Hospitality and the importance it has to all hoteliers. To receive and be recognised for this as a Director of Golf was unbelievable and something I will cherish forever.”

Throughout her career, Lynn hosted a TV show called “Golfing the World”, which was broadcast throughout America and says “It was a long time ago and I enjoyed every minute. I got to stay in amazing places and experience many of the great courses of and Spas at top golf resorts around the world. Sometimes the Tyrone accent turned into an American Accent so if they ever broadcast the show in Ireland, I’ll have to leave the country!”

Lynn has a passion for the game and excited with her recent appointment at Glasson. “Glasson is a very special venue. I knew it the moment I arrived,” she says. “You only have to look out the window of the hotel reception to know you are in special place. I get great satisfaction when I drive into Glasson because you are instantly hit with the WOW factor and it lasts throughout. My drive will be to ensure members enjoy the experience of their club and visitors get to enjoy the true Glasson experience as much as I do everyday.”